September 9th will be the 23rd anniversary of my arrival in the United States. When I first drafted this post, it was the 21st. I think that says a lot about what I’ve been doing with my time.

Just months before the 20th anniversary approached in 2015, I received a USCIS notice that my case status had changed and that a visa number had become available for my I-130 petition, which had been filed by my parents in 2008. I wasn’t sure if I could stay in the US to get my green card, which is called adjustment of status, or if I had to return to Russia for consular processing, which would have triggered a ten year bar to re-entry (I had overstayed my visa with my parents).

Because I had received DACA in 2012, there could have been a way for me to receive advance parole to leave the country and re-enter. This would establish legal presence, but it was complicated. I wasn’t sure it would work.

Luckily, I was eligible for adjustment of status under section 245(i):

A1. Section 245(i) allows certain persons, who have an immigrant visa immediately
available but entered without inspection or otherwise violated their status and thus are
ineligible to apply for adjustment of status in the United States, to apply if they pay a
$1,000 penalty. The LIFE Act temporarily extends the ability to preserve eligibility for
this provision of law until April 30, 2001. Use of Section 245(i) adjustment of status
previously was limited to eligible individuals who were the beneficiary of a visa petition
or labor certification application filed on or before January 14, 1998.

I received my green card in July of 2016 and went back to Russia about two weeks later, a month before the 21st anniversary of my last US entry in Miami. 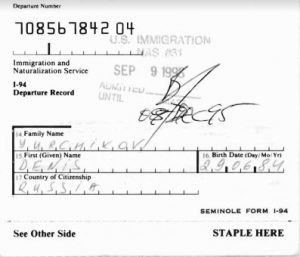